Pumpkins have become a staple symbol of Halloween in Western society. According to finder.com, in 2021, Brits will spend a massive £25.1 million on pumpkins. Although this seems like a exorbitant amount, it is estimated that this is still 15% less than in 2020, when over £29 million was spent.

Jack-o’-lanterns, and decorative pumpkins can be seen everywhere we go at this time of year, with ‘pumpkin picking’ becoming a popular family pursuit, and carving being a creative outlet for many.

10-15 million pumpkins are grown in the UK every year, but as with any product, massive consumption can mean massive amounts of waste left over after pumpkins serve their purpose.

According to the Scottish Environment Protection Agency (SEPA), Scottish household waste in the 2019 calendar year was 2.4 million tonnes – an increase of 17,000 tonnes (1%) from the previous year (total waste, not just pumpkins)*.

SEPA indicate that recycling figures appear to have plateaued since 2016.

In a study conducted in 2020 by environmental charity Hubbub, alongside the Fairyland Trust, it was found that 2,000 tonnes of plastic waste (equivalent of 83m plastic bottles) was created by seasonal outfits at Halloween alone.

In recent years, it has been estimated that more than 8 million pumpkins (the equivalent of 18,000 tonnes of edible pumpkin flesh) will end up in the bin, as many will not eat it.

Research by the stock cube brand Knorr and Hubbub highlighted that about 40% of consumers purchase fresh pumpkins to hollow out and carve, but 60% of them admit they do not use all the pumpkin.

According to Countryfile Magazine, the tradition of carving pumpkins started in Ireland in response to a popular folk story about a man who carried a carved-out turnip filled with glowing coal with him in the afterlife.

The custom was taken to America by Irish immigrants, where the idea of the ‘Jack-o’-lantern’ developed and increased in popularity over the years.

The Versatility of Pumpkins

The different parts of pumpkins have various uses that can help to reduce the amount of waste we are creating.

The flesh of the pumpkin (the bit that you scoop out, but not the seeds) can be used for a variety of things –

The pumpkin leftovers (the outer shell)

Once Halloween festivities are over, the outer shell of the pumpkin can be used in several inventive ways – 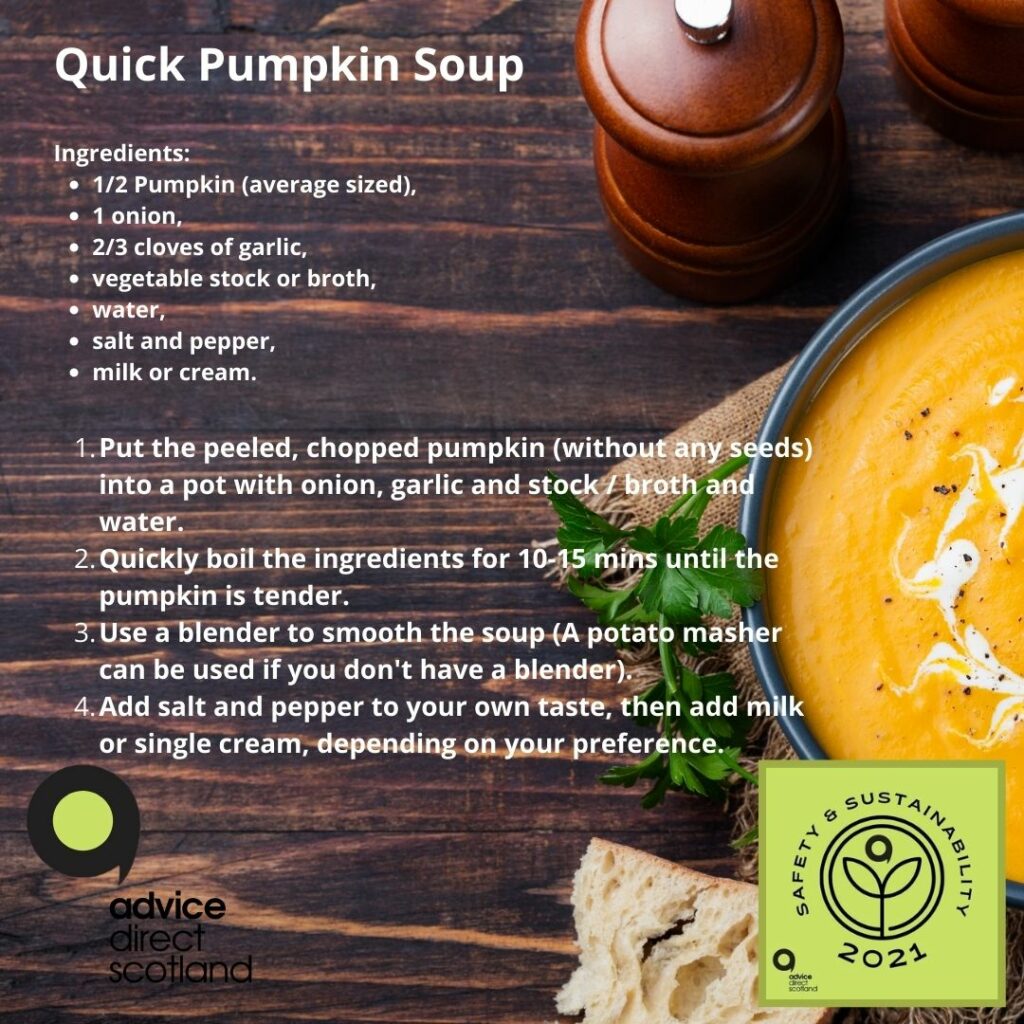 The true message to take away from this isn’t just about pumpkins. It’s about considering the items that we consume daily and potentially breaking them down into components that we can reuse, recycle, or give a second life to.

Next time you find yourself in a recycling predicament, think of the pumpkins, and whether you can apply the same principles to a different situation.

Advice Direct Scotland ‘s Safety and Sustainability campaign is taking place between the 27th of October and 12th of November 2021.

The campaign aims to demonstrate the small changes and considerations Scottish consumers can make to help climate change, whilst saving money, and making our lives a little bit easier. For more information visit our campaign page.

You can get free information from us on our Live Chat service or using the following options below: